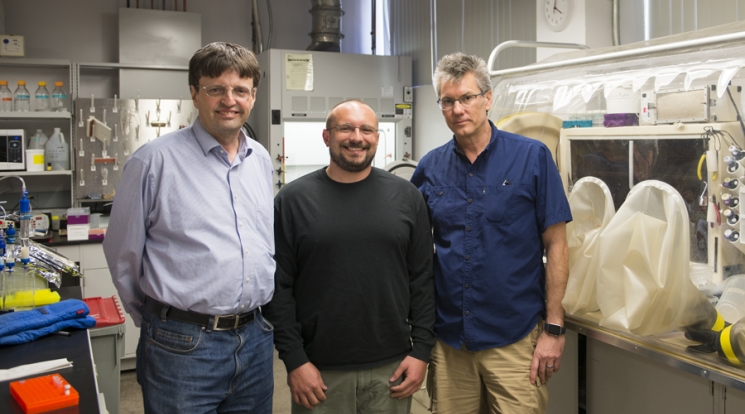 A team of scientists from ASU’s School of Molecular Sciences and Pennsylvania State University has taken us a step closer to unlocking the secrets of photosynthesis, and possibly to cleaner fuels.

Their discovery was recently published online in Science and describes the structure of a reaction center (from a heliobacterium) which preserves the characteristics of the ancestral one, and so provides newinsight into the evolution of photosynthesis. This study will be in print on September 15.

Photosynthesis is the most important biological process driving the biosphere. It harnesses the energy of sunlight, and provides us with our main sources of food and fuel. The study of photosynthesis has allowed scientists not only to understand the intricacies of how organisms use light to drive their metabolism, but has also paved the way for technological advances into sustainable energy sources.

“The photosynthetic process first came into being roughly 3 billion years ago, before Earth's atmosphere contained oxygen,” said Kevin Redding, a professor in the School of Molecular Sciences in the College of Liberal Arts and Sciences, whose group is leading the research at ASU. “Photosynthesis works by using specialized membrane proteins, called photosynthetic reaction centers, which collect the energy from light and use it to pump electrons across a biological membrane from one cellular electron carrier to another, resulting in conversion of electromagnetic (i.e. light) energy into chemical energy, which the organism can use.”

A great deal of research has determined that these reaction centers appeared just once on the planet, and have since diversified to perform different sorts of chemistry.

Despite the diversification, the reaction centers retain the same overall architecture, reflecting their common origin. During the last 3 billion years these proteins have been elaborated and changed and it has been difficult to reconstruct what happened over this enormous period of time. However, we do know that one of them developed the ability to oxidize water, releasing oxygen. This changed the world irrevocably, and allowed for life as we know it today.

The team believes that the first reaction center (RC) was simpler than the versions that exist today. In terms of the protein structure, it was a homodimer — that is, two copies of the same polypeptide came together to form a symmetric structure. The reaction centers whose structures we know are all heterodimers in which this inherent symmetry has been broken, although at their heart they still retain the vestiges of the original symmetric architecture.

The heliobacterium of the article in Science is a member of the most primitive of the photosynthetic bacteria, bacteria that do not make oxygen — in fact, they are intolerant of oxygen, like the first organisms. They also cannot fix carbon dioxide from the atmosphere and must use organic carbon sources. Important for this study, their RC is a homodimer.

Thus, this is the first homodimeric RC structure and it sheds light in several ways on what the ancestral RC may have looked like. In several ways the overall architecture of the protein is very similar to the photosystems of plants and cyanobacteria and the RC of the purple sulfur bacteria. However, built upon that common architecture are some crucial chemical differences that result in chemistry different from that of the known RCs, including their ability to use both water-soluble and lipid-soluble carriers, a capability previously thought to be restricted to one or another type of RC.

This work is the result of a collaboration between Kevin Redding, Raimund Fromme, associate research professor in the School of Molecular Sciences and a researcher in the Biodesign Institute’s Center for Applied Structural Biology, and John Golbeck from Pennsylvania State University. Raimund Fromme as protein crystallographer is the corresponding author of the present study.

Redding and Golbeck had decided 8 years ago to join forces to tackle the heliobacterial RC. They combined their individual Department of Energy grants into a joint grant, which has since been renewed twice: the third iteration started a year ago. Fromme started on his initiative, the crystallography of the RC with Iosifina Sarrou, a postdoctoral fellow in the Redding group who had optimized its purification.Fromme officially joined the grant as Co-PI four years ago.

The work truly took off when Christopher Gisriel, a doctoral student in the Redding group, started working with Fromme to crystallize the RC.

“I credit Chris and Raimund with doing what was necessary to get this structure,” said Redding, who is also the director of ASU’s Center for Bioenergy and Photosynthesis.

“This is the moment a crystallographer is waiting for,” said Fromme, explaining the years it can take to grow the perfect protein crystal suitable for X-ray studies.

Redding continued, “They were able to get the diffraction quality from a resolution of ~10 Å to 2-2.5 Å in a few years of very hard work … and then came the Herculean task of solving the structure.  Chris started with a very stripped down model of what the RC might look like, based on expected similarities with the cyanobacterial Photosystem I, and then worked constantly on it for months. He had to teach himself new software and work long nights to get there. Once he had something that was looking real, Raimund was able to take that and push it to the next level. And working together they have produced a truly beautiful structure at very high resolution.”

“Chris is a veteran of the U.S. Army, having served in Afghanistan,” Redding said. “He came to ASU as a biochemistry major and started working in my lab as an undergraduate researcher. Having never seriously considered the possibility of a career in research before, he was unsure at first how far he wanted to go down this path. However, he soon developed a taste for it, and then pushed me to allow him to take on the RC crystallography project as a Master’s student. I cautioned him against it, knowing how hard it would be and the low chances of success, but he persisted, and I eventually relented. He later decided to pursue a doctorate. He will defend his dissertation later this semester and I could not be prouder of him.”

“This reaction center is only found in organisms that can live in oxygen-free environments, like that of early Earth,” Gisriel said. "This work has opened the door for scientists all over the world to compare the primitive reaction center's characteristics with those of more advanced reaction centers that reside in oxygen-tolerant organisms. As a result, we are gaining a more clear and informed picture of how nature optimized light-driven energy collection.”

The team included Christopher Gisriel, Kevin E. Redding and Raimund Fromme of ASU; Iosifina Sarrou (formerly of ASU, now at the Center for Free-Electron Laser Science, DESY); Bryan Ferlez and John H. Golbeck of Pennsylvania State University. This work was funded by the Division of Chemical Sciences, Geosciences, and Biosciences, Office of Basic Energy Sciences, of the U.S. Department of Energy through Grant (DE-SC0010575 to KR, RF, and JHG) and supported by X-ray crystallographic equipment and infrastructure provided by the Biodesign Center for Applied Structural Discovery at ASU. Invited for the European Journal of Inorganic Chemistry - cover of this issue is the group of Anne K. Jones from Arizona State University, Tempe, AZ, USA. The cover image shows four complexes designed to mimic the H-cluster at which protons are reduced to hydrogen in [FeFe]-hydrogenase; only two inflate balloons by evolving hydrogen.

What prompted you to investigate this topic?

We recently showed that incorporation of bipyridine, a redox-active, chelating, nitrogen-donor ligand, into a functional diiron model of [FeFe]-hydrogenase resulted in unexpectedly high catalytic activity. Our goal in this study was to see how general that result is by comparing related complexes with bipyridine and bipyrimidine as well as by varying the bridging sulfur ligand. We learned that the bridging ligand does not make a big difference, but only the complexes with bipyridine are catalysts.

Which experimental technique was most useful to you? Why?

Electrochemistry! We are generally interested in electrocatalysis; that is catalysis at electrode surfaces. So we electrochemically interrogate virtually everything that we make. Electrochemical data can provide information about the electrochemical potential at which reactions take place and their rates. In short, it is both a thermodynamic and a kinetic technique for characterizing redox catalysts.

Is your current research mainly curiosity-driven or rather applied?

Our research is motivated by an applied challenge, decreasing fossil fuel usage by developing improved processes to generate renewable fuels, but we focus our studies on basic science questions that underpin renewable catalysis. In particular, we are interested in providing foundational understanding of the mechanisms of inorganic chemistry, redox chemistry, and catalysis in both chemical and biological contexts. We also aim to extract general ideas from biological systems to employ in chemical ones. In terms of reactions, we focus primarily on electrocatalytic production of hydrogen and other renewable fuel molecules.

What other topics are you working on at the moment?

We are broadly interested in redox catalysis, and we work on synthetic chemical and biological systems. On the biological side, we are working on a number of enzymes involved in anaerobic metabolism including hydrogenases and bifurcating enzymes. We are also attempting to develop functional synthetic systems that reproduce the exquisite specificity and control of multielectron redox enzymes. Current synthetic systems include small molecules, metallopeptides, and even supramolecular engineered protein structures.Who pays the bill for the research highlighted on the cover?This research has been financially supported through the Center for Bio-Inspired Solar Fuel Production, an Energy Frontier Research Center funded by the U.S. Department of Energy, Office of Sciences, Office of Basic Energy Science. Joe received a graduate fellowship from the IGERT-SUN program of the U.S. National Science Foundation.